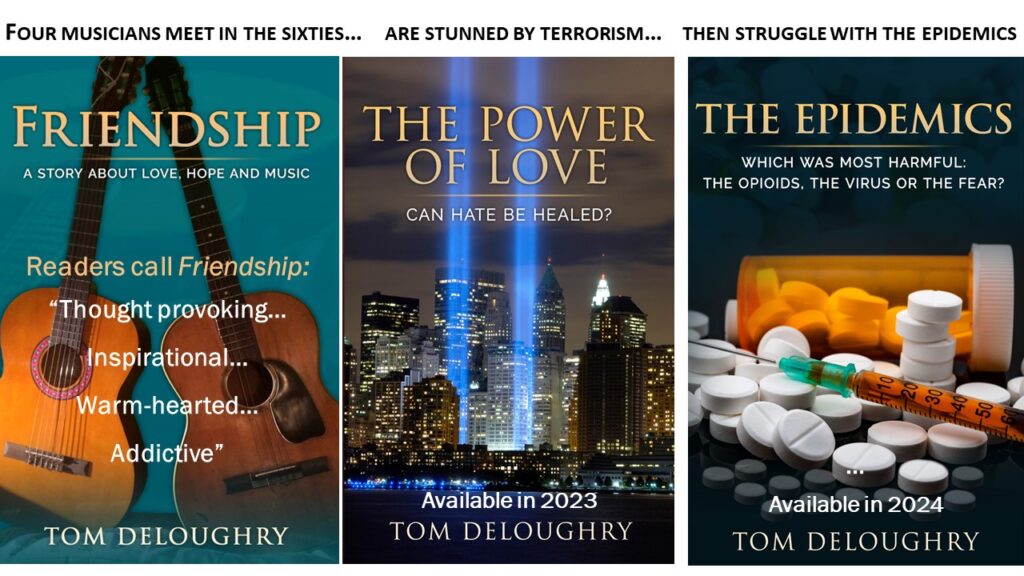 Music and art are used to convey emotion – and deepen the readers’ understanding of each character – throughout the Friendship Trilogy stories.

But in a real story, the story of your life, music  is a tool  you can use  to help yourself.

Music is also suggested as a “mindfulness” tool in the Less Stress, Better Health and More Love workshops.    You, or anyone,  can use vocal or instrumental music as a short-term strategy to deal with (or prevent) anger, depression or fear.  It is also a powerful strategy to deepen prayer.

Friendship is the name of the group that Donna, Susan, Ed and Paul form near the beginning of the Trilogy.   Music is part of how they reveal  themselves and seduce each other.

In the first two novels (Friendship and The Power of Love) Susan, Donna and Paul – plus Ed to a lesser degree –  use music as a way to bolster energy and renew hope.

In the third novel, The Epidemics, Donna’s granddaughter, Alice, becomes a communications department staffer in  the White House.  Before the mid-term elections, she collaborates with Paul and Susan to develop a national public health proposal that uses music to reduce fear – which they (and I) think is the most harmful epidemic. 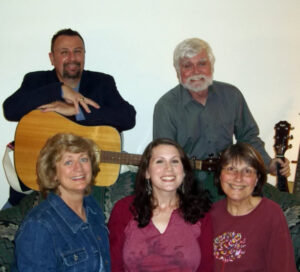 For nearly forty years, my wife, Kathy, and I played in a group very similar to Friendship.  For the last twenty years, we were joined by our daughter, Mary.  Pictured (to the right) in the back are Joe Tumino and Tom DeLoughry.  In front are Kathy DeLoughry, Mary DeLoughry Bieger and Nan Hoffman.

Please listen to our Amazon or Spotify playlist to hear some songs that Friendship perform… or that they use to romance each other.  And scroll towards the bottom of this page to hear one of two original songs, “World without Walls” that summarizes a major theme of The Friendship Trilogy.

SPOILER ALERT – Although anyone can enjoy the playlist,   the following summary is intended for agents, publishers and critics.  If  you plan to read this novel for entertainment, it will give away some of the plot.

There’s David!  David!!  Twenty feet away. Crouched in a ditch, one bloody hand clutching his rifle.   Waving at me to get down.  Eyes wide in his muddy face.

He orders his men, “Cease fire! Cease fire!” Yelling louder, “Stop the fighting!  STOP IT!!”   He rises towards me, blasts blurring his words.

Then lightning, freezing us in brilliant silence. He’s smiling at me, happy, like when I told him I was pregnant. His filthy face beaming at me, blissful.  …like I was giving him the moon and the stars.

I woke up, screaming.

Wine from water is not so small, but an even better magic trick is that anything is here at all.
So the challenging thing becomes,  not to look for miracles, but finding where there isn’t one.

Everything, everything’s a miracle.

…reflect Donna’s evolving view that the Spirit flows through everything, whether you call It Christ, Allah, Brahma, Gaia or Mother Nature.   Friendship also played this song at a “Death and Dying” conference led by Dr.  Elisabeth Kubla-Ross (our real life experience as volunteers for Life and Death Transitions)  to demonstrate how music could connect you to the Love that always surrounds you, whether you’ve experienced a death, a divorce or some other loss.

“Now every time I try to sleep, I’m haunted by the sound
Of firemen pounding up the stairs, while we were running down.”

The song lyrics are also referenced in Donna’s final thoughts as she dies during the terror attack at the World Trade Center.

World without Walls was written and recorded by Mike Bell in a Nashville studio in 2015, with his sister, Kathy Bell DeLoughry, singing harmonies.  Kathy and I formed a folk music duo after we married and continued performing in a group – similar to the novel’s Friendship – for nearly forty years.

Mike Bell served as the Curator of Popular Culture at the Tennessee State Museum in Nashville, Tennessee for many years.  He was also a staff songwriter for the Scarlet Moon Publishing Company.

Later, he wrote his song, “World Without Walls,” after being profoundly moved hearing the stories of his friend Joe O’Donnell, a World War II Marine photographer who had to photo-document the devastation of Hiroshima after the atom bomb was dropped. Years later O’Donnell became a dedicated peace advocate.

Bell said, “I had the title for about a year, and after talking with Joe in 1994 I had the song written in a few days. He loved it and later played it for the Mayor of Hiroshima in the spirit of healing when he visited there with an exhibit of his photos. The song is really my prayer for peace–tearing down the invisible walls of prejudice and hatred, and highlighting greed, another root cause of war.”

When a man brings up his kids

To hate the same people that his father did

He builds up a wall that we can’t see

And it cuts off the road to their humanity

How great this earth of ours could be someday

If we could live in a

We fill up our houses they’re cluttered with stuff

We could be billionaires and still not have enough

When all it could take to make life worthwhile

Is giving each other a reason to smile

I’m not the only one who still believes

We can live in a

There’s room for us all in a world without walls

Bell continued, “I wrote the second verse in 2005, replacing the one that referred to the bomb, wanting to make the song more universal and not add to the controversy whether or not we should have used a nuclear weapon.”

‘I met a man, used to be a Marine who had to take pictures of the battles he’d seen

At Hiroshima, after the bomb, he couldn’t believe all the people were gone

Ever since that moment changed his life

That we can live in a

See the human race in every face with the love God gives us all….’

Bell added, “I’ve sung this song in black and white churches around Nashville, and also at a Martin Luther King Jr. memorial service, in the hope that its message might make a difference, however small, in the way we look at our inherited beliefs.

Mike can be reached at [email protected],